Dave’s Homecoming Countdown: #13 Watching movies together at 2 in the morning

I will miss killing boredom so easy. Funky Campus!

Buttons. Buttons to open a door. Rarely appears in Germany. But here, they are at every door! Really… trust me. Everyhwhere!
And all the people here are too lazy to open the doors themselves anymore. They just press the button because they are so friecking lazy.
And that is contagious (ansteckend)! I became so lazy that I don’t even want to finish th

Dave’s Homecoming Countdown: #19 Sitting in Dining Hall and feeling like being in a High-School Movie

The Dining Hall at SFU is just like any other Dining Hall you know from High-School Movie. Every clique or groupe has it’s own table. They make fun about other tables. There are the Athlethes. The Freaks. The Brown Crowd (Indian, Middle-Eastern, Pakistani etc), there are the Cool Kids and so on.

I will miss sitting in the Dining Hall, complaining about the extra bottle of crap they put in the food so it tastes so horrid. I will miss watching all the young students enjoying their group, screaming and laughing, or drowning in their own greif cuz they can’t sit with the cool kids. I will miss you Dining Hall.

Cursing in English is so much fun becaue it seems not that big of a deal like in German. Especially complaining about the SFU Staff has become aqutie fashionable thing for me and Ian.
A often used word by Ian and me is: Crackers! It is a short version for Racist Crackers. Since I am German, not from this county and Ian obviously black, we like to make our ethnicity and cultural background responsible for shit that happens. Here is a typical conversation:

Dave: Damn Ian. They didn’t let me in because I were on the guest list.
Ian: Crackers!

And what I will really miss: Ian calling me dumbass. Whenever I forget or lose something, Ian calls me dumbass. English equivalent to IDIOT.
Cursing in English is just awesome. Funny and cool at the same time. I will miss that.

During the whole semester, studetns had been running over campus with a strange looking drink. It looks like this:

Of course, I’ve been asking me the same questions you might ask yourself now: What is this? What are those little black balls? What does it taste like? Where can I get this crazy stuff?
Well, after a covnersation with my norwegian friend Erlend, I found out, it is called Bubble Tea.
As the name claims, it is based on tea and those small little bals are called “pearls” and you can get this beverage in two types: Tea and Milk based drinks. Before given to the customer they are put into a machine.. This machine does to the drink what the McFlurry Machine is doing to the McFlurry at McDonald’s: shake, mix, twirl them.

I got myself also one of these weird Bubble Teas. I didn’t trust the weird tea flavoures one, so I got a strawberry/bananna milk flavour one and it tastes: fluffy and juicy. So if you guys ever get the chance to try a bubble tea: Go For It!

On the 1st of April 2009, Dave opened his window and had to witness this: 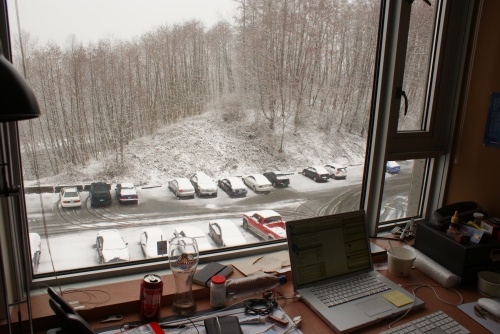 WE ARE THE CHAMPIONS! Rez Challenge Champions!

I don’t know if you guys knew it, BUT WE ARE REZ CHALLENGE CHAMPIONS! 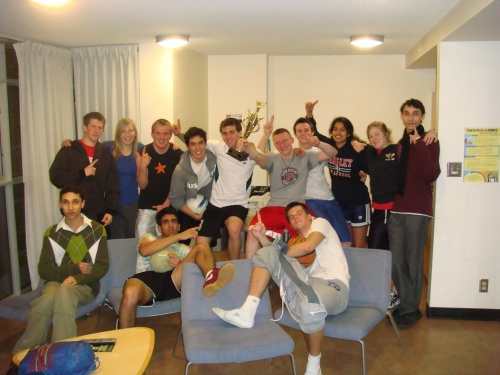 Every semester all the people living on campus and their respective floors and builduings compete against each other in a sports competition called Rez Challenge. All during the semester the floors and builduings play against each other in complete different sports: Basketball, Soccer, Handball, Speedball and even combined sports of handball and football and other stuff. That means they invent new games just for the Rez Challenge.

In the last week (this week) of Rez Challenge, the teams initiate the playoffs. It works according to the same system like in US Sports. The best 8 floors make it to the playoffs. We were ranked 2nd. That means we had to play rank 7, which was B7 (B stand for Tower B and 7 for floor number 7) which is The Jack Shadbolt House). Additionally, they choose a sport for the whole playoffs. This years sport: Soccer.
But it wasn’t normal soccer. They had added two rules: First rule: instead of shooting into a goal, the players had to hit a orange cone, which was positioned in the key of the basketball court. Second rule: the players were not allowed to step into the key.
However, the quarterfinals were not that hard. In the semifinals the pressure was much higher and the best 5 players: Kaif, Kyle, Rob, Cody and me had to play almost all through the game. But we managed to stay calm and make it to the finals: D6 vs. D7

This game was really intense and it took a lot of time until someone scored a goal. The other team was as good as we were and they didn’t give up on the ball. Kaif and me had to fight like tigers on our own half to keep the key clean and keep them from playing out a opportunity to shoot.
We were pushing to score a goal, because after a while we managed to gain the upper hand. Yet, their defense was very good and they jumped into every shot which made it really hard to score. In the end of the game, Ian finally managed to push the ball out of a big quarrel into the key and hit the Cone. SCORE!!!
After that, we tried to keep up the pressure instead of trying to maintain the score. But soon the final whistle shrilled. WE WON THE REZ CHALLENGE CHAMPIONSHIP!!!

First Results of my mid-terms…

Okay… I received my results for my mid-term exams…. Not what I expected actually.
Investments…. I already noticed in the exam that it is completely horrible… 20%….. Disastrous…

Organizational Behaviour…. better…. but still not what I expected. The multiple choice questions were really hard. I performed better on the written questions, but the written question was only worth 10 points of 70.
In the end I went home with 50 of 70 points, which is not amazingly good, but okay. I have to work harder here than in Germany.

So I should better get started….

IT IS DONE!!! Finally I have finished the Photography project or how we call it in our film class: Sequence Analysis

This project took a lot of dedication, as I was working on this in the media lab until midnight on sunday and until 3 AM in the morninig yesterday night.
Special thanks again to:
Victoria – as the mysterious but beautiful girl
Chris – as our dedicated hero
Graeme – for his awesome voice
Ian – for some random stuff 😀
Winnie – the dog, isn’t she cute?

Unfortunately… the quality of the pictures is not 100% conveyed to the video, so please also checkout the pictures on flickR to see them in their full quality.
But probably everybody rather wants to see the final video. OK, here you go:
You are checkmated.. after the click!

Why there hasn’t been much around here the past weeks…

Hello party people back in Germany or here in Canada.
Voices have become louder complaining about the decreased frequency of updates lately. I am sorry.

During the past weeks I kinda forgot about my blog and had a lot of stress with my classes and my mid-term tests and other things. But today I have finished my mid-terms and I can finally breathe a little bit.

Moreover, I am glad to tell you that Dave will do a TRIP TO CALIFORNIA!
Yup, that’s right folks, Dave is going to San Diego, Los Angeles and San Fransisco! From March 7th to 14th I will be doing a roadtrip with my buddy Max, who is studying in Texas at the moment. We will rent a car and do the classic californian roadtrip during Spring Break!

But there is one thing I am really missing these days: KARNEVAL!!! On Thursday, meaning yesterday, I was studying in the facilities of SFU while you guys back in Germany are partying and celebrating de Kölsche Karneval. But we managed to set up a Karneval party on Saturday on campus! So Funky Dave will at least celebrate a bit 😉

In diesem Sinne: Kölle… Alaaf You!!